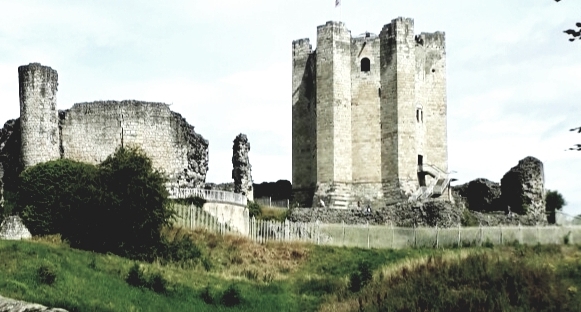 Conisbrough gets its name from the Anglo-Saxon Cyningesburh, meaning “King’s Fortress.” In the late Anglo-Saxon period it was the centre of a large estate owned by Harold Godwinson – who history buffs will know as the last Anglo-Saxon king of England. After his defeat, the estate (it was not yet a castle) was given to William de Warenne, William the Conqueror’s son-in-law. It was handed down through the generations and inherited by Hamelin Plantagenet, the king’s half-brother, in the 1160s, when the gigantic keep was built. Hamelin was young and new to the world of English nobility, so he wanted his castle to make an impression. After 1202, the rest of the castle we see today was built, including the stone outer walls and the structures inside the inner bailey.

The dates are important because, by the 1170s, architects in the south were starting to build in a new style – you’ve probably heard of it: Gothic. By the 1190s, Norman architecture was on its way out, increasingly seen as old-fashioned. Conisbrough was never updated, fell into and out of the Crown’s possession after 1322, and was in disrepair by the mid-1500s. It was one of the last castles of the Norman age – and one of the greatest. Hamelin and his heirs spared no expense in making it an intimidating symbol of lordly power.

Many people love Conisbrough for its keep. But I think it’s special for much more than that. If you look closely at the ruins that remain, they are full of little hints that give us a great insight into medieval life. I’m going to go through them now, with plenty of photographs!

First of all, the bailey’s outer walls have survived miraculously intact, considering they were built over 800 years ago. 7ft thick and 35ft tall in places, and containing the ruins of six towers, it’s hard for anyone not to be impressed by them – but I love them for more less-obvious reasons, reasons that don’t stand out when you first look at it.

I love these holes.

It’s hard to fully grasp it through just photos, but they’re wonderful because they show us where the support beams for the building’s original floors were. On the inside of the walls were the solar (the apartments of the lord), some other apartments for visitors and the great hall, where the castle’s common residents would have ate, lived and slept. We can see the footprints of these buildings on the ground because their foundations have survived, and this is common in most castle ruins, but it’s not often we see evidence of multi-storey flooring outside of keeps and towers. So yeah, a great sight if you’re that into medieval architecture, which I am.

Look at this little guy! A roof support, still standing after all these years. You can see how the mason has cut the bricks so they’re curved – not just functional, these were decorative, too.

The Apartments and Great Hall

Some more architectural gems: parts of the walls, particularly around the corners and windows, still have masonry attached to them. Because all that remains of many medieval castles are the ugly stones on the walls’ insides, we tend to think this is what they looked like back in the day. In actual fact, they were usually covered with beautiful whitewash – or in this case, evenly-cut masonry. These would all have been cut by hand, so they would have cost a fortune when they were done, but the result was gorgeous. It’s just a shame we can’t see them at their prime.

There’s more lying just beneath these walls, though. You could be forgiven for mistaking these for wells, which I did at first, too.

They sit in the corner of what would have been the castle’s long, two-storey apartment block, and historians now believe they were actually for waste. Most likely for human waste, they could also have been used to dispose of pretty much anything organic. I was quite surprised by this, but I soon learned this is something Conisbrough castle was pretty good at. Disease within the walls was what brought down many castles during sieges, and the builders of Conisbrough clearly knew this.

Around the kitchen and storehouse, there are a sequence of drains that filter any trash or liquid out of the castle, under the walls and down the hill. Drain montage:

I find these fascinating, but I’m not sure why. Maybe it’s because of how well they’re preserved?

Some of the most exciting stuff here, unsurprisingly, is within the keep itself. The keep is 100ft high and four storeys tall – enough for it to take someone afraid of heights, like me, a lot of effort to get to the top. But it was worth it because on the upper floors, where the lord and his family would have lived in private, there are some great finds:

If you know anyone who thinks medieval masonry must have been primitive, show them these. There’s a name for that pattern cut into the stones above the fireplaces, but I can’t remember it: that style crops up over and over again amongst 1100s and 1200s British castles.

And the SINK. The sink was what excited me most about Conisbrough. I just didn’t expect it, and it feels like such an intimate view into the life of the medieval nobles who lived here. Centuries ago, a medieval lord washed his hands right here. (And the plughole is yet another example of Conisbrough’s great waste disposal infrastructure – the tube runs through the walls and opens outside the castle.)

Fans of geography might find Conisbrough interesting because of this:

Yes, just like many companies today, medieval folk didn’t understand the implications of building a really heavy building on soft ground. The hill the castle is built on was actually scarped, articifically steepened. By the 1500s this wall had slipped down the slope, leaving the castle completely useless for military purposes. This may have been a good thing for us, though: it wasn’t used in the English Civil War because of this, saving it from the cannons and explosives that damaged so many other British castles, as both sides deliberately set out to make the country’s castles unusable.

Another surprising and rather funny survival: here’s a medieval toilet, sitting in the corner of what would have been a basement. You can see on the wall behind it where the floor of the room above started: surely that room wasn’t tall enough for someone to use the toilet sitting up straight?

Another nerdy architectural one, but I love this because you can see the ghost of the medieval interior: a doorframe and hallway.

On the surviving stones in the bottom right corner, you can see how they were cut to accommodate the shape of a door. This in the foreground is an old doorway, and the curved hallway behind it was shaped that way (presumably) to allow the door to swing in. Just to the right, off camera, are two steps that led to the kitchens. This is the kind of thing that gets me needlessly excited. You can kind of fill in the blanks with your mind and see how this room would have looked in 1200.

And last but not least, the keep itself. You can find tonnes of photos of this on the internet, but here’s another:

The keep is unique in British architecture for being round with six buttresses sticking out of it, making it look like a cog from directly above. It was designed to look intimidating and powerful: those buttresses actually weaken the building, introducing weak points where they join the curved main structure. The architects seem to have planned for this by making the keep’s base extremely thick and by using stronger stone – as you can see over my shoulder. But this was the new age! The Anglo-Saxon peasants had been suppressed, Norman control of the country was assured. Castles no longer had to be primarily functional military outposts. They could be impressive, indulgent, designed to intimidate the peasant in the field who takes a break from farming to stare at the horizon. The building actually uses an architectural trick: it tapers towards the top, making it look taller than it actually is. It certainly works. When you stand at the bottom, it looks much higher than 100ft.

Well, I went on for much longer than I expected. Hopefully you get the gist, and maybe you’ve got a newfound respect for Britain’s last Norman castle. It’s my favourite because it sits on the cusp between Norman and Gothic, between functional and comfortable castles. It straddles the early and high middle ages, and it still stands proud on that hill in Yorkshire, enticing visitors (which is how I ended up there). It’s well worth visiting.

Oh, and you can always find me on Twitter, if you’re so inclined.